Are we Heading the same way ?

Seems so - Scary
Posted by Deepak Misra at 3:53 PM No comments:

Email ThisBlogThis!Share to TwitterShare to FacebookShare to Pinterest
Labels: General

Saw this on the  road near Masinagudi.  From the car,  I could not make out what  exactly it was and was surpised to see the speed at which the beetle was moving the ball of dung across the road.  It nearly got run over by a passing car but did manage to cross the road. 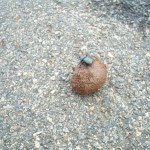 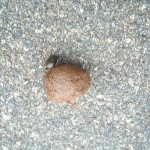 Chemmanatham is a small hamlet, about 2.5 kms east of the village of Mavanalla which itself is on the old  Mysore Ooty road.

Chemmanatham appears in the story “The Queer Side of Things” in the book “Tales from the Indian Jungle”.

Not much is known about the history of this village. It is surmised that there was a civilization here which got wiped out a couple of centuries back on account of the “great fever” which could be any of the prevalent tropical disease. Legend says that this was a fortified settlement and stones can be found on the way to the settlement

Currently the village has a few huts where local tribals stay and till their fields.

Chemmantham is also known for its old Basaveswara temple which is is semi ruins and forms the main basis for KA’s story.

The temple is in a semi dilapidated condition but portions of it are surprisingly well preserved. Like all tribal temples, there is no door to the temple and it seems that bears do shelter in the forest in the evenings. 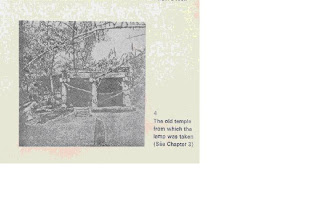 Here is a photo taken of the temple in May 2007 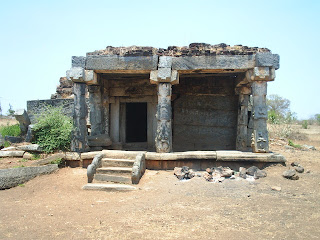 It can  be seen that much of the forest has been cleared.

Readers of KA have been making regular trips to this temple and this has become a pilgrimage spot for active  KA readers.

Parts of the history were corroborated on 24th Sep 2007 when a reader reported that he had visited the temple for the first time and was astonished to find a truck full of people there. It transpired that these people  were descendants of the original dwellers and their ancestors had fled from the place to Talavadi during the fever. In 1995, a mentally challenged member of their tribe suddenly made a trip to the temple in a feverish delirium and told the people to  make this pilgrimage every year and give offerings in the land of their ancestors.

This has become a  practice now.

The temple seems to have changed little since it was reported in the book approx 50 years back. KA describes the area as thick forest but the forest seems to have been replaced with shrubs. The well described in the book has dried up and is hidden by weeds now.

The hamlet is encircled  by an electric fence to protect against elephants(?)

Posted by Deepak Misra at 1:41 AM No comments:

The Deputy Conservator of Forests

Subject: Protest ? Your notice in Deccan Herald dated 16th May 2009

This has reference to the subject public notice

My objections are based on the following:

1) The period of 1 week mentioned is too short a notice to collect public opinion. It would seem that this notice is to comply with the letter of the law and not the spirit. If as mentioned in the notice that the felling of the trees is inevitable, then what opinion is being sought from the public? However since opinions have been sought from the public, these should be considered before any permission to allow tree felling is considered

2) It has not been communicated if other options have been explored before a decision that has the probability of irreparable damage on the environment. Has any alternatives been considered and more important ? have any suggestions from the public been reviewed ?

3) It would seem logical to plant saplings elsewhere and then fell the trees. The planting should happen before the felling. Development work of this nature has assumedly been planned a long time back. Why the planting can?t be similarly planned? The BBMP does not have a very good track record in this regard. What are the precautions being taken to ensure that the green cover is being replenished?

Posted by Deepak Misra at 10:00 PM No comments: